Will he or won't he?

Whitman native Mark Chauppetta, who used to participate in mixed martial arts bouts to raise funds for muscular dystrophy research - after his twin sons Troy and Andrew Chauppetta, now 23, were diagnosed with Duchenne muscular dystrophy - has been toying with a return to the ring for another fundraising fight for some time now. The question has been, will he? Chauppetta says his family and friends have been divided on the issue and his doctor had advised against a return to the MMA ring. "You're going to have to wait and see if I get in there,” he said. “But I don’t think you’ll be disappointed.” The resulting film, "A Father’s Fight,” will premier at 6 p.m., Saturday, Feb. 23 in Brockton's War Memorial Hall, 156 West Elm St. Tickets for the event are available at wheelchairstrong.com. "The film is a docu-drama, I guess you'd call it, a kind of remake of a documentary I did in 2009,” Chauppetta said. That film, also titled "A Father's Fight," on which he worked with Ron Van Damme who worked with WHCA-TV's late Executive Director Steve Roy. That film, done with “no budget” when Chauppetta was turning 40 and getting into mixed martial arts fighting to raise funds.

“It was really grass-roots,” Chauppetta says. “But I felt like my vision was 10 years too soon. At the time Troy and Andrew were young so they didn't have a voice and they were seen in the film, but it was kind of in the back- ground.” He said that latest film focused on his getting into the ring and "didn't have much substance to it." The new film looks at that focus from a different angle and Chauppetta didn’t want to pull at the heart-strings. While Duchenne is terminal, the film shows ability and over disabil- ity, he said. "It shows my sons driving and living life and going to the mall and fighting and bickering with me - being a family,” he said. “It shows the concern my wife has for me, coping with this disease. It's very raw, it's very honest, it's very real." His sons, who can now advocate for themselves and have a voice, enables the film to focus more on them than their dad. Chauppetta hired a local Brockton production company, Anaone Street Productions and filming began in in September 2017, finishing in June 2018. "I'm not giving it away," Chauppetta said, but some of the narrative of the original film is repeated in the new one, he said. Chauppetta, now going on 50, was a wrestler on the WHRHS team and describes that experience as a brotherhood that gets into one’s blood. "I still compete and wrestle and grapple,” he said. “It’s something that I dabbled with in my 20s and 30s and then when I was turning 40, a local promoter asked me if I would be interested in training and having a cage fight and he'd give $5,000 to my charity, So I was, like, sure!” The documentary, while well-received, didn't reach the type of audience Chauppetta wanted. Fast-forward 10 years, and a busy life filled with caring for his boys, directing the Wheelchair Strong Foundation while running a private investigation business, he said he finds himself getting into ruts. “Caring for disabled boys is physically and emotionally very strenuous," Chauppetta said. “Lots of times, you slip into funks.” Working out helps, especially since Chaupetta is a person whose wellbeing on all levels depends on physical fit- nesss. "I always find myself going back to the one thing that cures my anxiety, my depres sion over this disease, had been martial arts — Brazilian ju jistu, it’s been wrestling,” he said.

The film has been quite a journey, he said. Chauppetta started out story-boarding it, but it also took the necessary detours as life unfolded during the year and a half of shooting. "I directed the film and I produced the film - and I micro-managed it," he admits, as he used his past experience in film work to best advantage. Appearing in the film, along with members of the Chauppetta family are Lenny Clarke, Patrick Renna — best known as Smalls in “The Sandlot” — Joe Lauzon from the UFC circuit plays Chauppetta’s trainer. Hip-hop violinist Damien Escobar and Five for Fighting worked on the film score.

Chauppetta’s goal is to negotiate a distribution deal with a Hollywood-based company such as Netflix, Hulu or Amazon for streaming. It is not yet available on DVD.

If that effort is successful, he would like to transform it into a scripted film, and perhaps a goal closer to home.

“One of my passions has always been television and television production," he said, noting he has had preproduction meetings on a second documentary project on the wheelchair power soccer program in which his sons are involved.

His suppressed desire to be named to the W-H Wall of Fame has also become something of a running joke in his family.

"Maybe if I can get an Emmy for best documentary, then maybe I can finally get my picture on that wall," he laughed. 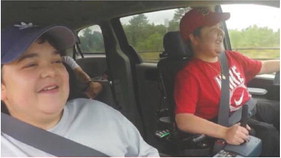 Troy and Andrew Chaupetta, above, drive their van in a scene from 'A Father's Fight,' premiering at Brockton's War Memorial Hall Saturday, Feb.23.

Click here to see this page in the eEdition: